Where Did the Etruscans Come From?

The people of Etruria were called Etrusci or Tusci by the Romans, Tyrrheni or Tyrseni by the Greeks, Tursci by the Umbrians, and Rasena by themselves. Their origin and ethnic affinities have been much discussed. An early tradition, reported by Herodotus, and repeated by twenty-two ancient writers, brings them from Lydia; but Dionysius of Halicarnassus doubts any such migration, because it is not mentioned in the Lydian history of Xanthus, and because the Etruscans differed from the Lydians in language, laws, customs, and religion. Dionysius adds that the Etruscans were a very ancient people, unlike all others in speech and manners. 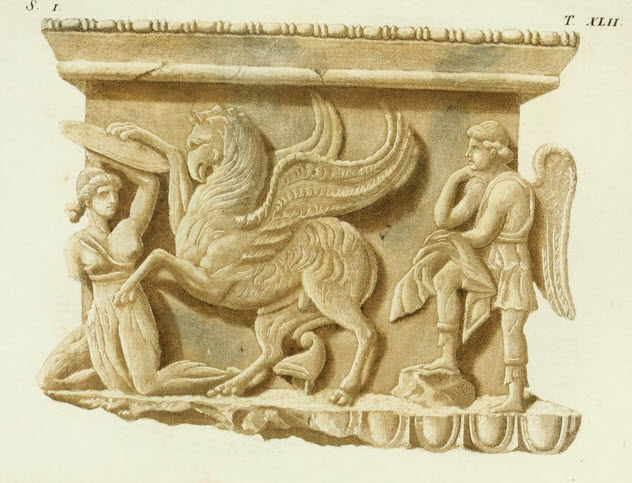 Modem writers who accept the Lydian tradition point out that Tarquinii, probably the mother-city of the Etruscans, is near the coast, and appeal to striking structural resemblances between tombs at Vulci, Clusium, and Tarquinii, and certain tombs near Sardis. They argue that, if Phocaeans settled in Corsica, Lydians may have found their way to Italy, and that, if the Etruscans had entered Italy by the Rhaetian Alps, the oldest settlements would be found in the valley of the Po, and not between the Amo and the Tiber. But it must be acknowledged that the migration of so numerous a people by sea is a formidable difficulty. In modem times it has been maintained that their language was Semitic, Celtic, Armenian, Gothic, Basque, or Albanian. Professor Sayce thinks it is mi generia, belonging to a family of speech which has everywhere become extinct. The present writer believes that the affinities are Ugro-Altaic, and of late years this opinion has gained ground. The failure of Corssen’s attempt to explain the language as dialect, akin to Umbrian, Oscan, and Latin, is a gain in the negative direction, and few scholars would now be found to maintain that it belongs either to the European or Semitic families of speech.

It seems rather to have been an agglutinative dialect, approximating, like the Finnic, to the inflectional stage.

Mommsen thinks the Lydian tradition arose from a confusion between the Torrhebi of Lydia and the Tyrrheni of Italy. Fresh light has been thrown on the question by the recent discovery in Lemnos of two inscriptions in a language which, if not Etruscan, resembles it in many points. Thucydides says that Lemnos was inhabited by Tyrrhenians, and Dr Pauli thinks these inscriptions prove that the Tyrrhenians (Etruscans) of Italy belonged to a Tyrrhenian people, which also occupied portions of the Aegean coasts.

Probably there were two elements in the population of Etruria, one autochthonous, numerous, and servile; the other an intrusive conquering aristocracy. Caere and Cortona are said to have been "Pelasgic" cities before they were occupied by the Etruscans. Certain inscriptions from Etrurian tombs, formerly classed as Etruscan, are now attributed to the more ancient ‘ Pelasgic ’ race. Conestabile distinguishes between the tombs of an aboriginal people who practised cremation and those of the later invaders who buried their dead. Livy says that the speech of the country-folk in Etruria differed from the language spoken in the towns, and we may well believe that a conquered race would be left to till the soil for the benefit of invaders dwelling in walled towns. The splendid tombs from which our knowledge of Etruscan speech, luxury, and art is derived cluster round the walls of a few great cities, and are mostly the sepulchers of wealthy nobles. We occasionally meet with the urn of a freedman (lautni) or of a slave, but we know nothing of the tombs of the inhabitants of the villages, who may well have belonged to another race, and have spoken a different language. Again, the abrupt collapse of the Etruscan dominion in Campania and in the valley of the Po indicates that it was a dominion of conquest rather than of colonization; and the complete effacement of the language in Etruria proper argues that the Rasena were a ruling aristocracy, comparatively few in number, though high in culture. 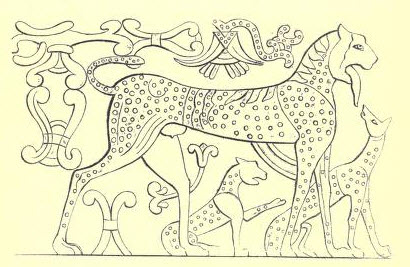 A Detail from an Etruscan Painting Found inside a Tomb

The physical type of the Etruscans is decidedly not Italian. Professor Calori affirms that Etruscan skulls differ markedly in shape from all other Italic skulls. The descriptions by ancient authors, "pinguis Etruscus" (fat Etruscans) "obesus Tyrrhenus," (obese Tyrrehneans) are confirmed by the recumbent portraits, and effigies on the sarcophagi, which show they were a sturdy race, short and stout, with large heads, thick arms, high color, scanty beard, and hair black or occasionally chestnut. It has been remarked that they were not unlike the Kheta (Hittites) who invaded Syria from the north, and whose monuments are found in Asia Minor as far west as the neighborhood of Sardis, In any case we may agree with Dionysius that the language, customs, and religion of the Etruscans differed from those of any nation with which he could have been acquainted, while their physical type, as represented on their monuments, is so unlike that of other Europeans as to incline us to agree with the dictum of Seneca: Tuscos Asia situ vindicat (Asia claims the Etruscans as her own.)