Who Were the Etruscans?

The Etruscans were an ancient people inhabiting a country called Etruria in what now is modern Tuscany. Their origins, their culture, and their language is shrouded in mystery. 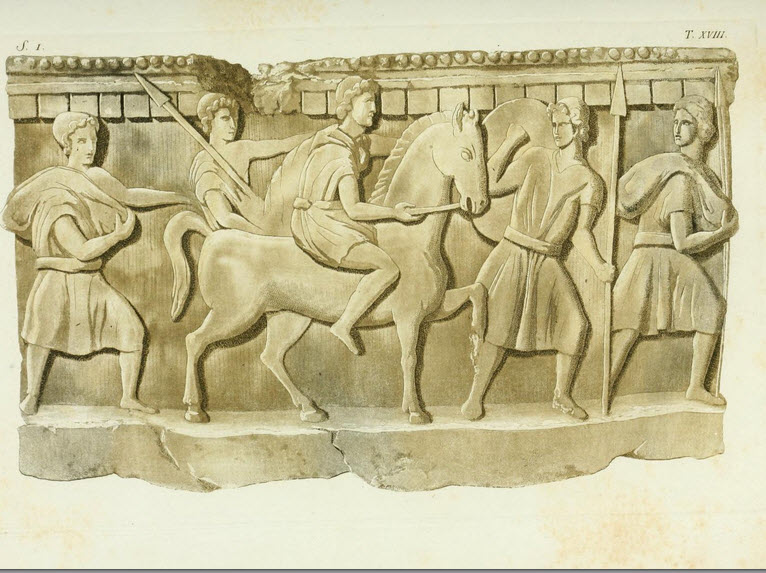 Scenes of Etruscan Daily Life from a Sarcophagous

Etruria, or Tuscia: an important country of ancient Italy; called Tyrrhenia by the Greeks. It was bounded N. by the Apennines, E. by the Tiber, and W. by the Mediterranean or Tyrrhenian Sea. The inhabitants wore called Etruscans (Etrusci) and Tuscans (Tusci) by the classic Latin writers. Their national name in the Etruscan language was Rasena. The chief rulers bore the general title of lucumo. The cities which composed the league of Etruria proper are universally reckoned as twelve in number, but these can not all be identified, as no ancient writer has preserved a list of their names. Among the most important were Tarquinii, Veii, Clusium, Volsinii, Cortona, Caere, Perusia, Arretium. The early traditions mention several Etruscan kings, as Porsena, King of Clusium, but during the greater part of the historic period the political constitution was an aristocracy.

Origin and History of the Etruscans

The question of the origin and affinities of the Etruscans has long exercised the ingenuity of scholars and antiquaries, but it still remains undecided. The opinion generally adopted by Roman writers ascribed to them a Lydian origin. The earliest authority for this tradition is Herodotus, who states that he received it from the Lydians. This opinion was rejected by Hellanicus, who represents the Etruscans as Pelasgians, and by Dionysius of Halicarnassus, who considered them indigenous (outochthones), and states that in his time they were very distinct from every other people in language as well as in manners and customs. Niebuhr maintained that they were a mixture of Pelasgians and Umbrians with a race of northern invaders (Rasena), who conquered them at an unknown date.

He believed that the Rasena or Etruscan nobility came originally from the Rhaetian Alps. Knowledge of the history of the Etruscans, even during the period of their greatest power and prosperity, is very vague and imperfect. The Etruscan language is thought to be Indo-European in its grammatical construction, though its vocabulary, so far as ascertained, can not be with any certainty affiliated. There is no Etruscan literature extant, and no bilingual inscriptions of any length have been found. There were three Etrurian centers of occupation: (1) from the Tiber northward to Pisa, where the Etruscans seem to have been limited by the Ligurians; (2) the settlement on the Po, of which Bologna, Verona, and Mantua were the principal cities; the Etrurian population is shown by inscriptions to have extended northward as far as the Rhaetian Alps; (3) that in the Phlegraean plains surrounding Capua and Nola, which are regarded as Etruscan cities.

Livy states that before the Romans became the dominant people of Italy the power of the Tuscans was widely extended both by sea and land. Several Greek writers attest the facts that they were bold and enterprising navigators, and fitted out large fleets for naval warfare. In 538 b. c. they fought a naval battle against the Phocaeans at Corsica. The Tuscans and Carthaginians were allies on this occasion, and in other battles against the Greek colonies of Italy. Besides the twelve cities of Etruria proper, these people possessed another state or confederacy on the northern side of the Apennines. According to the Roman traditions, the Tuscans were a powerful nation before the foundation of Rome, 753 b. c. It probably attained its greatest power about 150 years later. 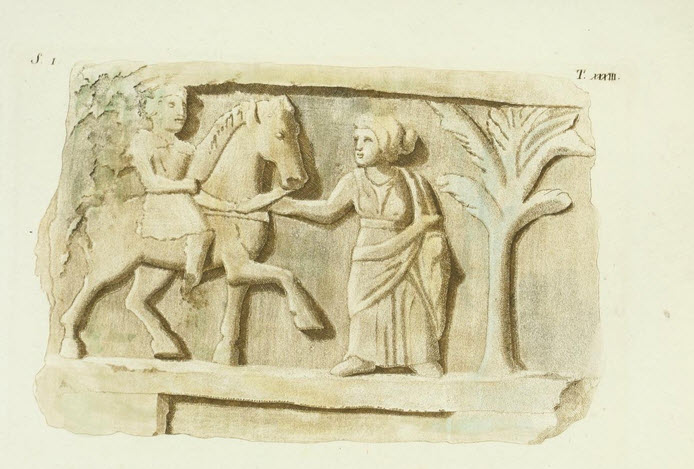 An EWtruscan Woman Handling a Horse. The Etruscans Were Unique Among teh Ancient Peoples of the Mediterranean in Giving Women Important Status in Their Society.

The Tuscan cities of Clusium and Veii were involved in several wars against the rising power of Rome. Tradition indicates the establishment of an Etruscan dynasty at Rome under the later kings, the two Tarquins, and assigns to this period of Etruscan domination the construction of the Cloaca Maxima and the Capitol. About 508 b.c., Porsena, King of Clusium, marched against Rome, and, as the best critics believe, captured it. Hostilities continued, with occasional intervals, between the Romans and the Veientes from 483 b. c. to 396 b. c., when Veii was captured by Camillus and destroyed. It does not appear that the other Tuscan cities gave any aid to Veii during this period. This apparent neutrality may be explained by the fact that their northern frontier was then infested by predatory hordes of Gauls, whom they were scarcely able to repel. In the subsequent wars it was sometimes Tarquinii and sometimes Volsinii that fought against Rome. About 309 B. c. the combined forces of several Etruscan cities were defeated by Fabius Maximus in a battle which gave the first decisive blow to their power. The conquest was completed by a victory which the Romans gained at the Vadimonian Lake in 283 b. c. The Etruscans, however, retained long after this event their own language, customs, religious rites, and nationality. They were admitted to the Roman franchise in 89 b. c.

Ancient writers concur in representing the Etruscans as the most cultivated and refined people of ancient Italy, and as especially skillful in ornamental and useful arts, in which the ideas and patterns used singularly resemble those of Egypt. The Romans derived from them many arts and inventions that conduce to the comfort of life. The genius of the Etruscans appears to have been practical rather than speculative. They excelled in agriculture, navigation, engineering, and in useful public works. They had made great progress in architecture, sculpture, and painting, and especially in bronze-work and gold jewelry; but their artistic ability was far inferior to that of the Greeks.

The so-called Tuscan order of architecture is a Roman, and more especially a Renaissance modification of the Doric. The Cloaca Maxima at Rome proves that they were acquainted with the true principle of the arch, and exemplifies their skill in the construction of sewers. Of their temples, theaters, and amphitheaters no considerable re-mains have been preserved. Among the existing monuments of their massive and cyclopean masonry are fragments of walls which defended the cities of Cortona, Faesulae, Clusium, and Volaterrae.

Their tombs are in some cases chambers hewed in a cliff or solid rock, and adorned with facades like those of temples. The interior walls are decorated with paintings, and the tombs contain vast numbers of vases, tripods, urns, etc. The Etruscans excelled in several branches of plastic art, especially in the fabrication of bronze articles and pottery. Bronze statues and utensils were exported from Etruria in immense numbers. Among the extant specimens of their bronze-work are probably the figure of a she-wolf in the Capitol of Rome, of which group however, the two children are modern, and the Chimera in the Museum of Florence. The painted vases called Etruscan, which have been found in great numbers, especially at Chiusi (Clusium) and Vulci, are Greek in design and workmanship. The metallic specula or mirrors, adorned with figures on one side, a peculiarly Etruscan manufacture, are prized as illustrative of customs, mythology, etc.