The Etruscans were an important nation and a significant pre-Roman civilization in ancient Italy, located primarily in the central region now known as Tuscany. The etruscans were called Tyrrhenoi or Tyrsenoi by the Greeks and Etrusci or Tusci by the Romans. The terms Tyrrhenian Sea and Tuscany is derived from these names. The Etruscans called themselves Rasenna, a term that is often shortened to Rasna or Rasna.

A Portrait of An Etruscan Family. Etruscan Art Suggests that Women Were Held in High Esteem, in Contrast to their Role in Rome and Greece

The Etruscans conquered Rome when she was still in her infancy. The Etruscans kings ruled Rome for a period of about 100 years and are credited with turning Rome from a small farming village into a city. In fact, many aspects of Roman, and Europeam civilization can be traced to Etruscan origins and contributions.

Despite their close contact with the Romans, little is known about the Etruscans and their culture. After the Roman conquest the Etruscans were granted Roman citizenship and were absorbed into Roman society. Traces of their homeland can still be found in modern day Tuscany in Italy.

There are two different theories about the origin of the Etruscans, both originating with the ancient Greek writers.

According to Herodotus, the Etruscans originated in Lydia (now western Turkey) and emigrated to Italy around 800 B.C. as a result of a famine in their native land. Contrarily, Dionysius of Halicarnassus (c. 100 BC) believed that the Etruscans were indigenous to Italy, part of an ancient nation "which does not resemble any other people in their language or in their way of life, or customs." 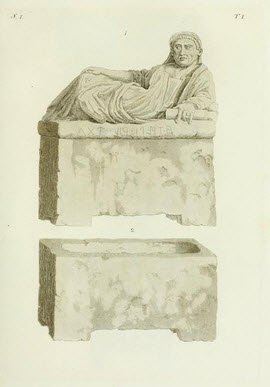 Little is now known about their culture, religion and literature. In fact, the only examples of Etruscan writing can be found in tombs and consists mainly of short epigrams and genealogical information. No works of Etruscan literature survive, if they even existed at all.

Topics covered in this section include: